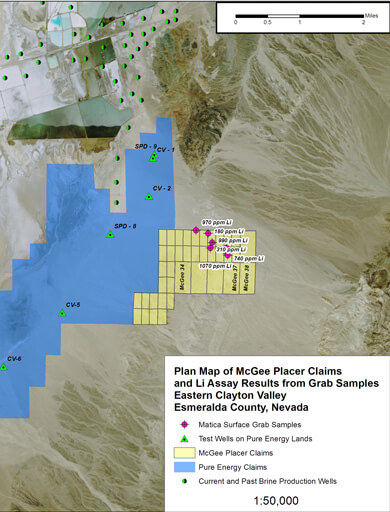 The McGee claims are located adjacent to Pure Energy’s Clayton Valley project. Historic and present drilling programs in adjacent and nearby properties are suggestive of the potential for discovery of lithium-bearing brines.  Clayton Valley is the site of the only lithium brine production operation in North America, the Silver Peak lithium mine, which has been in production since 1966.

Boris Ziger, Matica CEO states: “With this second group of claims, Matica establishes itself as a significant presence in the Clayton Valley. We will immediately begin an exploration program to add to the work being done by our neighbours.”

The McGee claims are underlain by interbedded clay rich evaporite units with interbedded ash tuffs.  These units are exposed at surface in the eastern portion of the claims and are concealed by thin gravel cover units in the western portion adjacent to the current Pure Energy drill area. Initial reconnaissance sampling of limited portions of the outcrops in the central portion of the claims has been completed and assay results show that the green clay rich, salty evaporite units are mineralized with lithium, potassium, sodium and magnesium with anomalous strontium and phosphorus.  The results shown in the table below indicate a classic lithium enriched evaporite rock sequence is exposed in the central portion of the claims.

The assays from the seven surface grab samples are highly encouraging as they clearly show that there is abundant lithium at surface.  The sampling was performed under the supervision of Robert D. Marvin P.Geo., CPG a Qualified Person under 43-101. Samples from the property where submitted to ALS Minerals in Reno, Nev., for analysis. The samples were crushed, split, a portion was pulverized and a one-gram aliquot analyzed by ALS Chemex method ME-MS61 (48 elements, including lithium, four-acid ICP-MS). Lithium is very easily leached from surface exposures and the Company has reason to expect that higher Li levels will be found at depth below the exposed, mineralised claystone-volcanic ash sequence.  Since the samples reported were collected from the weathered salt rich surface of outcrops it also likely that higher values will likely be found by digging 20 to 50 centimetres into the outcrops.   At levels below the water table, it is anticipated that lithium bearing brines may be found. Please see attached map for sample locations.

Two high quality Li targets are currently recognized on the property.  First, the outcropping, mineralized claystones and interbedded ash units in the central portion of the property are a highly attractive exploration target as these materials are used to build evaporation ponds.  The high lithium levels and clay rich nature make them valuable in the mining process currently being used by Albemarle in the Clayton Valley.

Secondly, subsurface brine targets are also readily apparent.  Ground water directly below the outcrops is very likely to contain lithium brines due to the observed mineralisation at surface.  The depth to ground water under the outcrops is unknown currently but the outcrops lie at an elevation only 100 to 150 feet above the adjacent valley bottom indicating that ground water should be present at marginally deeper levels than those in the adjacent Pure Energy exploration area.  In western portion of the property brines may occur in the down faulted portion of the rocks observed at surface.  This would include the known presence of multi-metre thick ash units which serve as the primary lithium brine aquifers in the Clayton Valley.

The acquisition terms of this arm’s length transaction for 100 per cent of the property are $17,500 cash due upon signing and a further $30,000 within 12 months and, eight and half million shares of Company stock, subject to regulatory approval. No finder’s fee was paid. There is 3.75 percent royalty associated with the property. Matica’s initial work program will include surface sampling and gravity survey. Matica continues to evaluate additional graphite and lithium projects for acquisition.

For more information on Matica Enterprises please visit the website at: www.westislandbrands.com.

On behalf of the Board of Directors

The Company’s public filings are available for review at www.sedar.com and www.thecse.com.

Certain information in this press release may constitute forward-looking information. This information is based on current expectations that are subject to significant risks and uncertainties that are difficult to predict. Actual results might differ materially from results suggested in any forward-looking statements. The Corporation assumes no obligation to update the forward-looking statements, or to update the reasons why actual results could differ from those reflected in the forward looking-statements unless and until required by securities laws applicable to the Corporation. Additional information identifying risks and uncertainties is contained in the Corporation’s filings with the Canadian securities regulators, which filings are available at www.sedar.com.